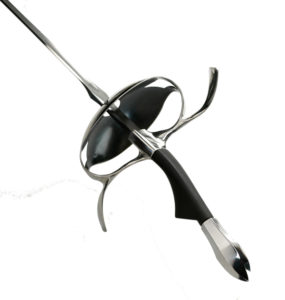 At Tizona we teach both foil and epee.  What’s the difference?

The foil is a light-weight sword with a blade that is thin and rounded and so very flexible.   Points are scored by getting the tip of the weapon in the target zone and this is limited to the torso.   As a foil bout can occur at lightening speed, an electronic scoring system is used to detect hits on target.   The foil has a blunt, spring loaded button at the point of the blade that must be depressed.

Because opponents may have advantages over each other (such as height), special “right-of-way” rules have been developed to even the odds and reward technical and tactical skill.  Points can be scored by defending as well as attacking.  Regardless of gender of physical attributes, foil is a discipline for everyone! 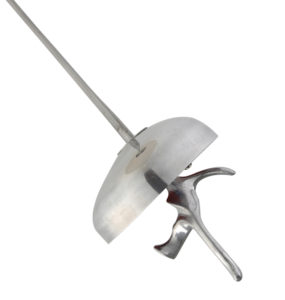 The epee sword is heavy than the foil.  Fencers are allowed to hit each other anywhere, including the feet, hands and face (which is covered by a mask and so it’s safe). Unlike the foil, it doesn’t matter who attacks first and if fencers attack at the same time, both can score simultaneously.  Points are scored by the tip of the weapon striking the opponent and registered through an electronic scoring system.  There is no ‘right-of-way’